What A Keto Dieter Can Learn From Wheat Belly

There’s a reason a Wheat Belly book review has to be the first review I write. When I was told by my doctor that omitting gluten from my diet would cure me of what was then diagnosed as iritis–a painful inflammatory condition in the eyes–I dutifully obeyed. Sort of.

It only took me about three days to decide to comply. But if we’re being accurate, it was anything but duty or compliance that motivated me to deglutenize. (Not a word? Hey, if Dr. Seuss and Shakespeare can invent new words, I’m in good company.)

People are ditching gluten for reasons beyond celiac disease. I had heard of people removing gluten from their diets for much lesser conditions and having unexpected positive results, so on a pragmatic level it made sense. I was curious to try the experiment.

You’ll want to read my big gluten post for more information on the beginnings of my gluten-free transformation. Eventually after a few months of omitting gluten from my diet, I was curious about how removing gluten could have so many positive effects on me when I didn’t have celiac disease and my autoimmune disease test came back negative.

How did it actually work? I wanted to keep gluten out of my diet because of the improvements I was seeing, but I also wanted to be able to intelligently explain to people why I wasn’t going to eat the special homemade chocolate chip cookies they made for me.

I realized later after reading the subtitle, that the book is probably aimed at people who want to lose weight. Dr. William Davis is a cardiologist who discovered through putting his heart disease risk patients on a wheat-free diet, that wheat is what is causing the obesity epidemic in our country.

This book is so much more than weight loss. It gave me so many answers to why I was gradually feeling better and better not eating wheat or gluten-containing products.

I won’t dissect the entire book, but I do want to give some key points that I found fascinating.

You probably know all about genetically modified foods (GMOs) by now. Scientists modify the genes of all sorts of fruits and vegetables now to get the plant they’re looking for. The story behind wheat actually sounds inspiring and heartwarming at first.

A geneticist named Norman Bourlag was looking for a way to feed hungry people who just cannot grow enough food to sustain themselves. He modified wheat so it doesn’t grow as tall, so that when it’s given nitrogen-rich fertilizers, the resulting heavy seed head doesn’t cause the tall stalks to buckle under the weight.

Now, I have a hard time villainizing good old Dr. Bourlag, which is what it might sound like I’m doing in the next paragraph. Do you think people who are starving care about whether the food they get to eat is going to cause them other problems?

I don’t think so. Survival vs. unknown health problems? It’s a lousy choice, and not much of a choice at all. However, even if we knew better, I believe most of us would choose survival.

The problem is that human safety testing was never conducted. It was just never a question in people’s minds. Now, 95% of the wheat we eat is genetically modified, with infinite possible hybridizations and gene insertion variables.

Unfortunately, there is plenty of evidence showing that the newer wheat strains do cause problems. Gluten structure variations are one of those problems. The modern strains of Triticum aestivum actually have a higher content of genes for gluten proteins that are linked with celiac disease.

(For more on this, read chapter 3 of Dr. Davis’ book, Wheat Belly.)

This bit of information completely floored me.

Dr. Davis tells us that when patients remove wheat from their diet, about 30% of them report symptoms that can only be described as withdrawal: fatigue, irritability, mental fog, depression, and inability to function. (Keto flu, anyone??)

Researchers discovered that when gluten is digested, it breaks down into several polypeptides. These wheat polypeptides have the distinctive ability to cross the blood-brain barrier.

Once they’re in, the polypeptides bind to the brain’s morphine receptor, which is the same place to which opiate drugs bind. This produces a mild form of euphoria.

Because of its addictive quality, wheat is actually an appetite stimulant. Just like any other euphoria-inducing substance, once your body gets some, it will continue to crave that substance.

“Lose the wheat, lose the weight.”

(Read Chapters 4 and 5 of the Wheat Belly book to learn more.) 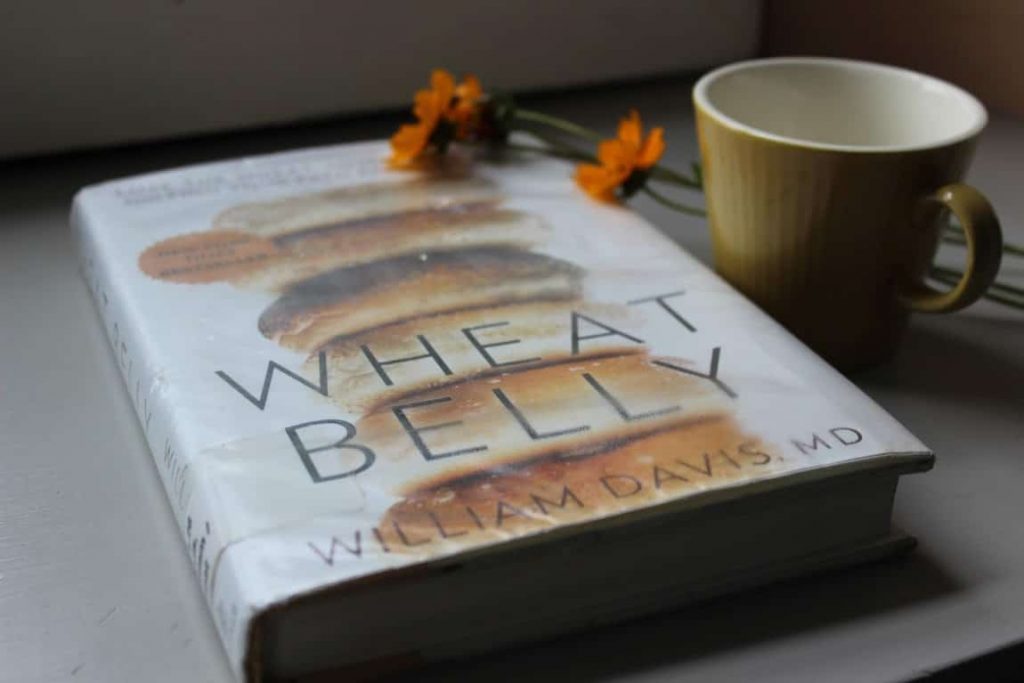 Gluten isn’t the only problem modern wheat has. Wheat contains amylopectin A, which is a form of complex carbohydrate that increases blood sugar. How much, you ask?

The GI of kidney beans is 51. Grapefruit is 25. Noncarbohydrate foods like salmon are essentially zero, with no effect on blood sugar.

Whole wheat bread has a whopping glycemic index of 72. Whoa!

Whole wheat. The “wholesome” whole grain bread. The amylopectin A in wheat raises blood sugar, which triggers an insulin release. When blood insulin is high, it provokes visceral fat accumulation. Hence the aptly chosen title of Dr. Davis’ book. This occurs whether you’re diabetic or not.

As of 2011, when the Wheat Belly book was published, the American Diabetes Association was advising diabetes patients to cut fat, reduce saturated fat, and eat 135-180 grams of carbohydrates per day, which did not include snacks.

If I was a conspiracy theorist, I might be pointing my finger at the pharmaceutical companies right now–that’s who would be benefiting from the constant flow of insulin into the diabetics following that high carb regimen!

Looking for a dessert that won’t spike your insulin? Look no further. 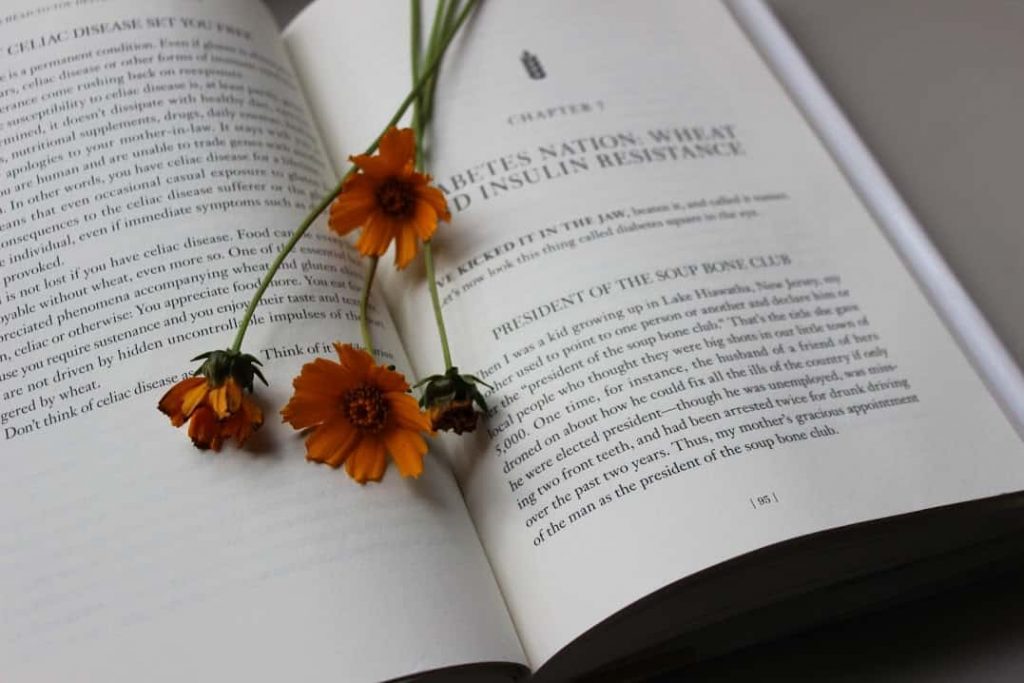 Now we get to the good stuff. Like I said before, Dr. William Davis is a cardiologist, so he knows his stuff when it comes to all things heart. This part can be really confusing because of the misinformation that was touted as fact for so many years (i.e. low fat=healthy).

I’m still not sure I understand all of it, but if you’re going to get facts, an enlightened heart doctor is where you should start.

I’m going to keep this brief, since a cholesterol post is in the works. So here’s the summary version.

Cholesterol is not just one number. It’s a combination of several factors. Cholesterol is not in and of itself a bad thing. Having too much of the wrong kind is. Small LDL (low-density lipoprotein) particles are a very common cause of heart disease.

This is because it’s easier for smaller LDL particles to accumulate in the walls of arteries. Cholesterol itself is not the problem, it’s the size of the lipoprotein particles that can contribute to conditions like heart disease.

Consuming wheat increases small LDL. Or at least, that’s the conclusion that Dr. Davis comes to from studying the research and observing his own patients’ experiences.

He says that if wheat increases blood sugar more than almost any other food and consequently triggers insulin the most, we can safely predict that it also causes de novo lipogenesis in the liver, greater visceral fat depositing, and increased VLDL/triglycerides and small LDL.

I found this to be true for me, when after the only dietary change I made was to remove wheat and gluten, and 6 months went by. My cholesterol had lowered to the normal range and my doctor no longer recommended I begin taking a statin drug.

(This was also the same doctor who told me a diet change wouldn’t work. Mmhm.)

If you have a cholesterol “problem” and just read one chapter of the Wheat Belly book, please read chapter 10!! This is also a great chapter to read if you’re skeptical about the fat part of the ketogenic diet. We’ve been brainwashed for so long to believe all fat is bad, that this is a hard one to conquer for a lot of us keto dieters.

Wheat Belly was transformational for me. Dr. Davis’ other chapters cover things like how wheat disrupts our pH (more so than animal products!), changes our hormones, causes premature aging, neurological disorders, and skin conditions.

In Part Three of Wheat Belly, Dr. Davis tells you how you can make the change to going wheat-free and provides recipes to start with. This is a longer quote, but I love this little pep talk he gives in chapter 13 to those contemplating making the change:

“Trust me, it’s worth it. If you’ve gotten this far, I assume you are at least contemplating a divorce from this unfaithful and abusive partner. My advice: Show no mercy. Don’t dwell on the good times from twenty years ago, when angel food cake and cinnamon rolls provided consolation after you were fired from your job, or the beautiful seven-layer cake you had at your wedding.

Think of the health beatings you’ve taken, the emotional kicks in the stomach you’ve endured, the times he begged you to take him back because he has really changed.

“Forget it. It won’t happen. There’s no rehabilitation, only elimination. Spare yourself the divorce court theatrics: Declare yourself free of wheat, don’t ask for alimony or child support, don’t look back or reminisce about the good times. Just run.” 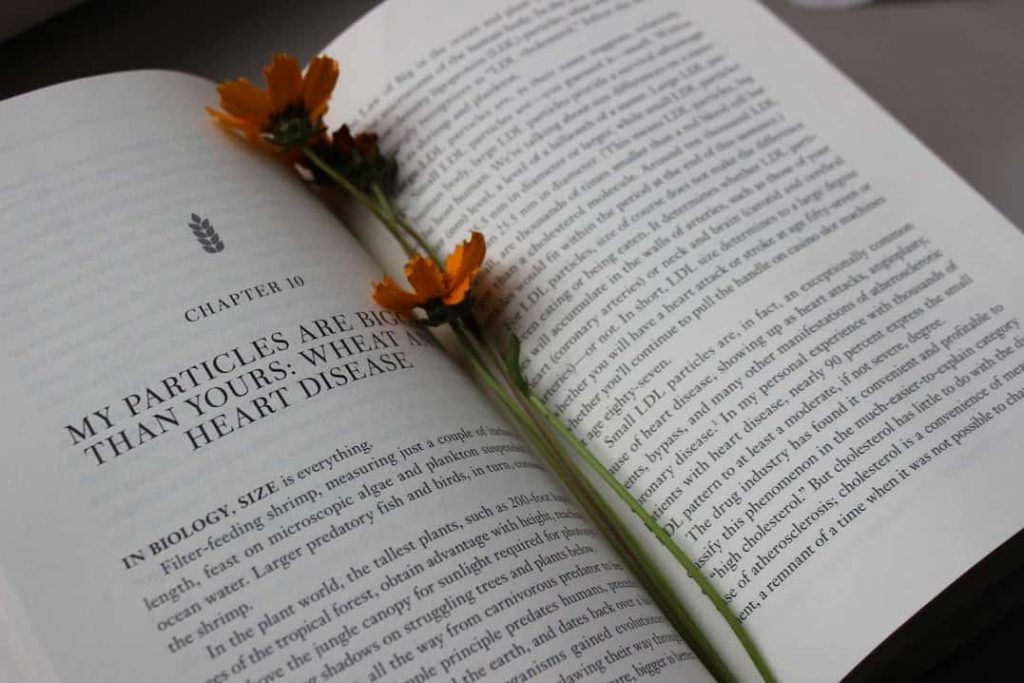 If you haven’t heard of Dr. William Davis or his book, Wheat Belly, you’ll want to look him up, post haste. Not only is his work intelligent and eye-opening, but he also has a great public presence. His interviews are entertaining to listen to and his writing is hilariously witty.

If you’d like to purchase the Wheat Belly book through my affiliate link, please click here. Happy reading!

If you’d like to hear more about why I’m checking out the ketogenic diet, please click here, or find the About Me tab at the top menu of Keen for Keto.